WHY DOES ALCOHOL GET INTO THE BLOODSTREAM SO QUICKLY?

Alcohol is absorbed very quickly by the blood and spreads easily to all the organs. That’s because alcohol molecules are very tiny. They don’t have to be broken down by digestive enzymes to get into the blood, and they dissolve easily in water and fat, both of which are prime components of the human body.

WHY IS ALCOHOL ABSORBED MORE QUICKLY WHEN THE STOMACH IS EMPTY? 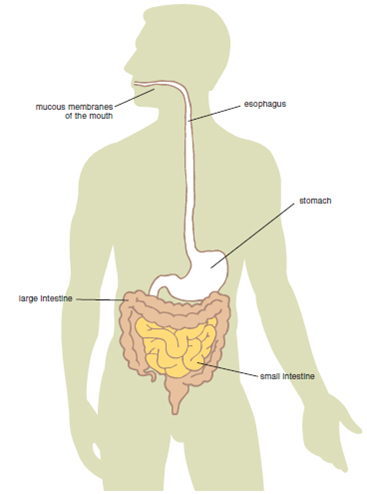 If there is no solid food in the stomach or intestines, the alcohol will come into contact with the intestinal walls more easily and pass quickly into the blood. All the alcohol of one drink may well be absorbed within 30 minutes.

However, if your stomach is relatively full, the alcohol will stay there longer. The absorption process will be slower and may take up to 90 minutes.

Beverages that are more than 20% alcohol irritate the lining of the stomach. This slows the opening of the pyloric valve, through which the contents of the stomach pass into the small intestine. Drinking several shots of spirits one after the other in the hope of getting drunk quickly may actually produce a delayed reaction.

WHY DOES ALCOHOL GO TO YOUR HEAD SO QUICKLY?

Once it’s in the bloodstream, the alcohol spreads to all parts of the body and is distributed in all tissues containing water. Because alcohol is carried by the blood, it follows that it will be delivered particularly quickly to organs with many blood vessels, such as the brain, the lungs and the liver.

HOW IS ALCOHOL METABOLIZED BY THE LIVER? 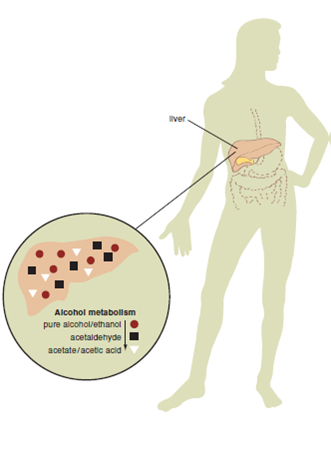 Most of the alcohol (about 90%) is eliminated by the body’s metabolism. While the kidneys and gastro-intestinal tract play a role in this process, the liver is the organ primarily responsible for transforming the alcohol absorbed by the blood. In the first stage of metabolism in the liver, an enzyme called alcohol dehydrogenase transforms the alcohol into acetaldehyde, a highly toxic substance that affects the entire body. This activates another enzyme – acetaldehyde dehydrogenase – which transforms the toxic acetaldehyde into inert, harmless molecules of acetate, or acetic acid.

No matter how much or how little you drink, your liver can only metabolize 15 17 mg of alcohol every hour. The speed at which it does so depends primarily on the number of metabolic enzymes in the liver, which varies from one individual to the next and is thought to be genetically determined. Other factors also influence the process.

WHY DOES ALCOHOL HAVE SUCH AN IMPACT ON THE BRAIN?

Before it reaches the liver, the alcohol in the blood affects other vital organs that contain a lot of water and require a significant volume of blood in order to function. The most immediately observable effects can be seen in the brain.

Alcohol restricts a number of brain functions by stimulating the brain’s pleasure centres. At first, the effects are pleasurable: there is a reduction in stress and inhibitions, and a sensation of either calm or excitement.

How you feel depends on your mood at the time. If you are sad or angry before you drink, the alcohol may initially put you in a better mood. But then the opposite occurs, and you may well end up even sadder or angrier than you were before you started drinking.

The speed at which alcohol is eliminated depends on the amount and type of food present in the gastro-intestinal system. During digestion, the stomach’s contents are passed into the small intestine (a process known as gastric emptying). The higher the fat content of the food in the stomach, the more time is required for gastric emptying, and the slower the process of alcohol absorption.
Scientific studies have shown that people who drink after a meal rich in fats, proteins and carbohydrates absorb alcohol more slowly than those who drink on an empty stomach.

Gender does matter: Me Tarzan, you Jane

All other things being relatively equal, if a woman and a man drink exactly the same amount, she will have a higher blood-alcohol level than he does. That’s because women generally weigh less than men and their bodies have a higher fat content. Lower body weight means lower water content, so the alcohol is dissolved in a smaller amount of liquid. This results in a higher concentration of alcohol in the woman. Because women are generally smaller than men, they also
have less alcohol dehydrogenase in their bodies, which means that a greater percentage of the alcohol women drink remains in their blood.

Teens and older people don’t tolerate alcohol as well as others, mostly because of their (generally) lower body weight. Consequently, as with women, the alcohol is dissolved in a smaller amount of liquid.  Also, teenagers have fewer alcohol-eliminating enzymes in their livers than adults do.